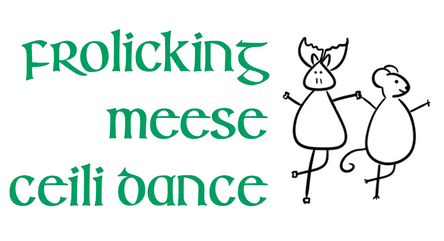 Normally when people think of Irish dancing they think of leaping little girls with curly wigs and tiny dresses. Or of Michael Flatley and Riverdance. Or clogging.

Céili dancing is related to all three of those things, but it's a different branch on the Irish dance tree. Céili (pronounced "kay-lee") is the folk dance branch. It's what you'd do if you wanted to get together with some friends and dance in someone's barn or kitchen. Some of the best descriptions that we've come up with are that it's an Irish version of square/contra dancing; or that it's similar to the kind of dancing you'd see in a Jane Austen movie, but sped up and danced to Irish music.

Céili dances come in a variety of formations including two long lines or big circles. They can also be progressive--meaning the group you're dancing with may change as you move around the dance hall.

Set dances are based on the French Quadrille formation, which is four couples arranged in a square. Each dance has multiple figures like reels, jigs and slides interspersed with a repeating body (kind of like the chorus of a song). A set dance does not progress. The same group of eight people does the whole set of dances together.

There is apparently a lot of argument over whether céili or set dances are more Irish. Some people argue that set dances can't be Irish because they're based off a French formation. Others point out that some of the céili formations may have come from Norse dances. Honestly, Griff and I don't care. As long as it's danced to Irish music, it's Irish enough for us. We do both set and céili dancing because both are fun.

﻿A Little Bit of History﻿

In a lot of ways the history of Irish dance is the history of Ireland, and it's been under siege for a long, long time. We don't have much record of what Irish dancing looked like before the 1400s or so. At that point it was already changing anyway thanks invasions by, and then assimilation of, some Vikings and some Normans. In the 1700s the English started legislating against Irish culture and religion, which drove the dancing underground, but didn't quite kill it off.

Then, in 1922, Ireland finally got it's independence. In 1923, the Gaelic League formed. It's purpose was to revive Irish culture, but also to establish a separate and unique culture. This led them to chuck set dances and establish céili dances as the only "real" Irish dances.

People were dancing their céili dances at their houses, in barns, or at crossroads until 1935 when the Catholic Church decided it had had enough and got the Public Dance Halls Act passed. The Public Dance Halls Act made it so that dancing had to be done in a licensed public place. This effectively killed the crossroads and house party dances and also continued the decline of set dancing. It also made it easier for Irish dancing to be supplanted by foreign music and dance styles.

The decline of Irish dancing in general worried people in Ireland so they set out to revive it in the 1960s. Both céili and set dances were included. Since then both styles have cycled through being more popular. We're equal opportunity dancers here in Central Oregon though so we do a little bit of both.